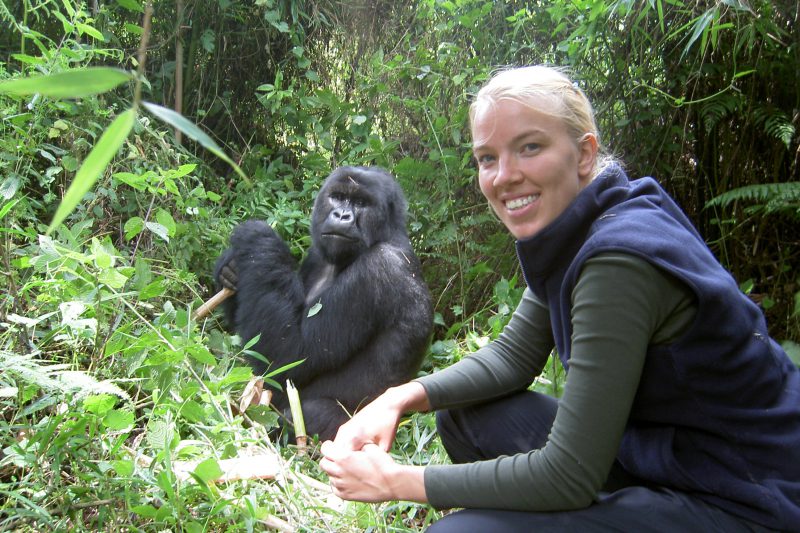 As big fans of anything wildlife related, we have a tendency to google what animals can be found in its original habitat for every country we visit and then make an effort to go see them. East Africa is of course well known for its safaris and hunt of the Big Five, but when you are into primates, this is certainly the area to go see them! Both the biggest primate in the world, the Mountain Gorilla, as well as the chimpanzee can be found in these countries. But which should you choose?

There are not many places in the world where you can see gorillas in the wild, but the volcanoes on the border of Uganda, Congo and Rwanda are your best bet to see them. As gorillas live in family groups, and build a nest to sleep in for the night, they are easy to keep tabs on. Rangers ‘live’ with these families, and communicate to the base camp where they can be found. You will be appointed a family when you arrive, which can mean you can be very unlucky when your assigned family decided to camp out at the top of the volcano the night before! It does mean however that provided you can make it up the volcano, you are 100% guaranteed to see the gorillas in the wild.

Chimpanzee trekking is done in Uganda and Rwanda as well, but Tanzania also offers the possibility, which is what we decided to go for. Chimps have a very different way of living, and are continuously on the move, making them harder to catch. Add to that the African heat, having to wear long sleeves and pants to avoid bites AND a mouth mask to ensure no human diseases are transmitted to the chimps and you know it will be a strenuous exercise. But once you do see the chimps, and their human-like clownesque behaviors, it is truly a sight to be seen!

Yes, to see these primates in real life is expensive and requires effort, but the rewards are far greater than the cost. On top of that, you can rest assured that the cost of it will only go up in the future as conservation and wildlife preservation is coming higher and higher on the agenda of every country, as it is becoming a great source of income. We would not have wanted to miss it for the world, but if you had to pick one, we would say your safest bet is the gorilla tracking. The guarantee of actually seeing them, and relative ease to get to them (besides the final scramble up the volcano) outweighs the cost. Add to that the fact that their numbers are small, makes the experience all the more unique. No mass tourism here or real life zoo experience, it is a true one-on-one with the worlds largest primates, and it is worth it!

We have finally left…  Next Post :
Previous Post :   How being Dutch helps to become an international traveler