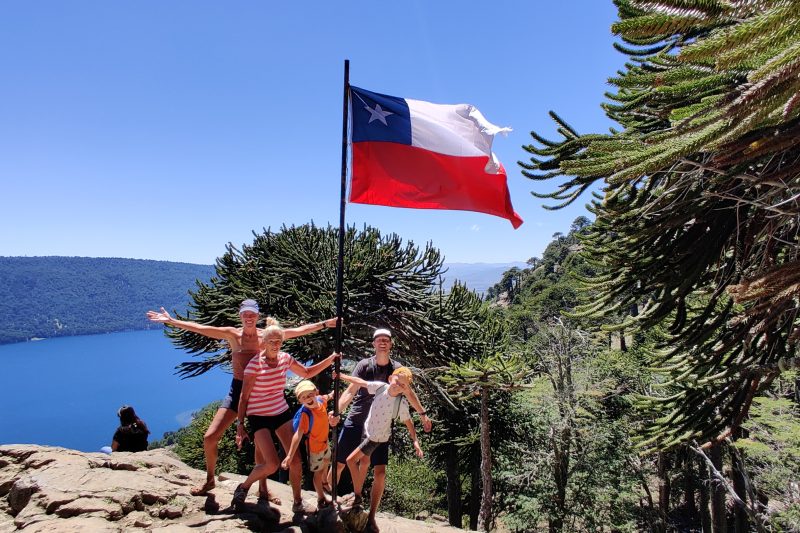 After saying goodbye to our padel court and driving the windy road back again, we take the next gravel stretch to avoid a 35km detour via the toll road. The road is fine and we start to get the hang of it, and the destination for our lunch stop is the town called Villa Baviera. Driving there we only know the basics of the town – that it used to be the home of the German-based cult called Colonia Dignidad – and that the place is now open to tourists. Driving in we got charged for entering, which turns out to be a charming little town amidst plantations in the valley of the lower Andes.

We quickly find out that the money making has really become a second nature here, and feel ripped off after paying a lot of money for some strudel (nowhere near as good as the German original) and a cappuccino which is literally a coffee with a dash of whipped cream from a can! We try to go to the museum but that turns out to be closed, but we do speak to some of the people who were there during the time of the cult to get a feel for what it was like back then. They only tell us about the leader, Schaeffer, and that he turned out to be quite the pedophile. Later in the evening we google the place and our stomach turned a bit more… hard pass for those that consider going!

The destination for the day however is the beautiful ski-resort of Termas de Chillan. On the slopes of a few volcanoes lies this resort which turns into a hike and bike paradise in summer. We aimed for the campsite with access to the thermal baths, but because of Covid they have had to limit the number of people and thus doubled the prices of an overnight. We thus roll down the hill again in search of a campsite, but it seems to be slim pickins around here. A cabana rental mentions there is a lodge uphill that may also offer camping, so we decide to give that a go.

Again the road is wobbly and bumpy, seemingly getting nowhere, but as we roll into the lodge we see a beautiful hotel with nicely maintained grounds around it. We try the door but no one answers, but some of their guests coming back from a day out are so kind to call the owner and ask about camping for us. As it turns out there are 4 sites set up around the corner with picnic tables and electricity. By far the most expensive so far, but with the pool and facilities and the fact they have their own reserve behind it with hiking paths makes it really worth it.

The next day is thus full of hiking and biking – Sven rents a mountainbike and spends the day down hilling in the bike park. Taking the chairlift up every time he meets several interesting people who help him go down and give him tips & tricks, but most of the time it is pushing down and using the breaks a lot! The rest of us attempt to hike up to Lake Huemul through the private reserve of the lodge, but unfortunately hit a dead end. It seems the track is not completed yet, so we head back down and have lunch by the stream.

Not deterred by the lack of track, the two ladies decide to give it one more go along the official track. This turns out to be a 5 hour hike uphill again, a large part being almost straight up, but with the reward of a skinny dip in the lake before scrambling all the way down again. The boys and grandpa spend the rest of the afternoon by the pool, and so we all have a fantastic day here at the Roca Negra Lodge.

To break up the ride down we decide to take a first stab along the side roads again ending up in Collipulli. We can be very short here – the drive was great, Collipulli is a dreadful town. With very little overnight options it turns out the hotel we were aiming for is closed (in the middle of high season on a Saturday??), the next is a dampy dump with a creepy owner and the last one we get stuck in has dirty cabanas which run out of gas within the first 5 minutes of cooking. Granted, the gas problem is solved within 30 minutes, but with 6 hungry people after a long drive, nobody is in a good mood…. Time to quickly leave again!!

We take a quick look at the highlight of Collipulli – their yellow bridge designed by mr Eiffel himself, and then hit the pedal to the metal on the Ruta 5 to get as quickly away as possible. Today we have another mountain destination on the agenda, the town of Melipeuco and its adjoining volcano, the Llaimo. For the first time we see a volcano covered in a bit of snow up close, and it is quite a majestic site! We have some time to shop around for a campsite and end up at an agro-camping, a place to pitch our tent on a farm. The farmers couple is absolutely lovely and obviously enjoy having us – especially the boys – around.

As we are relatively close to the Argentinian border, we spend the next day driving along a gravel road towards the town of Icalma, set in a pretty mountain lake setting. The hike up to the viewpoint starts from the private property of an old man, who collects payment for the pleasure of doing so. In return he provides walking poles and assures us that the path is very well marked with orange paint, which it really is (every plant or tree gets a smear of orange…) and we have a nice climb up for a few hours. After the exercise we take a dive into the lake which is surprisingly nice in temperature for this altitude and then take the drive back down again.

With the NP Conguillo closed on Monday (incredible in high season), we take a quick side trip to its entrance gate where there is a loop across volcanic landscape to the Truful Truful cascade, with the beautiful Llaimo volcano in the background. Getting back to town, the road back to the farm is explored with a big bag in hand, to collect the blackberries that are scattered along the road. The result is almost a kilo of the good stuff, which will be enough for at least 2 breakfasts. Back at the farm Luc sets out to chop wood again with the axe, for which he gets rewarded with a home made pot of raspberry jam, and we enjoy the evening and the sound of chicken and sheep.

Hard to say goodbye to this little haven, and our faith in good quality accommodation restored, we take a last picture in the morning in proper gaucho wear, have a breakfast of fresh sopaipillas (dough fritters) and drag our heels while packing up our stuff. We have a short drive planned today so there is no rush, but when we get to lake Villarica, it turns out that this incredibly touristy area has only one road along the lake that gets crowded and easily adds 1 extra hour to our drive. The bad news is we have to take this road back as well!

Still doing good on arrival time, we again shop around for our place to sleep. The town of Pucon only has expensive and cramped options, so we drive outside of the town towards the mountains and try some options there. We end up at Camping Los Canelos, a little bit off the beaten track, but a gorgeous piece of land meticulously taken care of by an older lady and her family. The camping spots are nicely spaced out, with plenty of bathrooms with hot showers, and access to the flowing river next door. Grass everywhere so ample space to play and run around, and as an extra bonus the cutest little grey cat happily cuddled by all.

We need a bit of time in the town of Pucon to do important things; looking for gifts for Bo’s birthday that is coming up, and finding a notary to get some more admin done for the car. After almost 1hr of traffic jam to get into town, we get most of the admin done that we needed to do, but a proper gift for Bo turns out more difficult than we expected. So half fulfilled we go back to the campsite, where we are pleasantly welcomed by another batch of freshly picked blackberries, YUM! Bo’s self-created fishrod (which he has left out all day by the river) unfortunately did not catch any fresh fish, so there is chicken and rice on the menu for dinner :-).

As we move away to our next stop we have to give the Villarica a closer look, so we drive up the volcano side to the nearest parking lot to the tip of the crater and start our ascend on the hike known as Los Crateres. The hike is a pleasant climb alongside the volcano through mostly lush forest, until we get to the edge of the volcano landscape that is barren and black. The sendero is called ‘los crateres’ because it ends at several small craters on the side of the main volcano, nicely illustrating the damage hot lava can cause on any side of the volcano. Arriving at the end of the path the clouds start to gather and we even hear some thunder rumble afar, so we quickly start our descend. Fortunately we only have a few spats and even some hailstones, but nothing seriously bothering us on the way back. Time to say goodbye to this area of the lake district and move on to the next adventure!