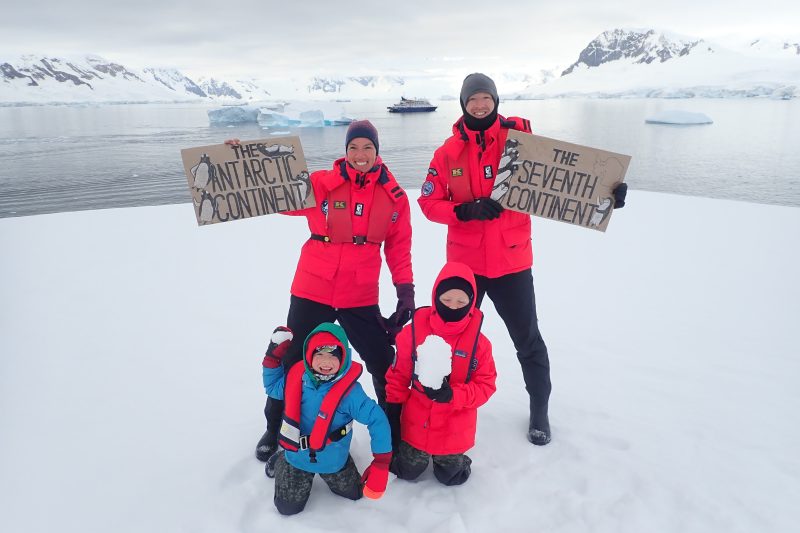 Made it to the Antarctic – Half Moon Island

The relief of having passed the Drake without serious puking heightens everybody’s spirit. And if there was a slither of grumpiness left in you, this would soon be gone once you set sight on the Chinstrap and Gentoo penguins of Half Moon Island! We have our first transfer on board the zodiac – again a highly coordinated and smooth operation – and land on the pebble beach of the island. No snow on the ground, but the beach is covered in chunks of ice washing ashore. There is walking route set up lined by red flags, and where there are crosses made out of flags you need to stay out.

There are several penguin colonies on the small island, which means there is a coming and going of penguins along the beach as well, and they then make their way uphill hopping and climbing and sometimes tripping as they go. Seemingly not bothered by humans at all, the trick is to make yourself small and let the parade pass you by, they can get very close! The fur seals however are a grumpy bunch, and thus a force to be reckoned with. There are several across the island which means you tread lightly and leave them be as best as you can, or you will be barked at and potentially hunted down! Every landing is several hours to give everybody the time to enjoy the site and take your time to explore. A great first wildlife encounter on our journey south. In the evening we celebrate Sven’s birthday a bit more at dinner, with a proper singing to by all guests and the staff, and us dressing the part. A 3rd of march to never forget, and holding great promise of what is to come.

The next day we take a stab at Deception Island, an island that was made out of a volcano eruption with both natural as well as historical value. Planning the landings in this part of the world is a tricky business, as it depends on many factors, most weather related. While we can all handle a bit of snow or rain even, it is the wind and the swell that determine whether you can safely put a zodiac in the water and land it on shore. Deception Island is know for its swift weather changes due to its shape and location, meaning most cruises sail into the bay and circle out again. We are lucky today, as there is no fog up the mountain which means we can land at Telefon Bay and take a loop hike across the crater and back to the beach again. Luc has found his role in the (dis)embarkation work as he helps pull in and push out the zodiacs with the crew. Mom has a close encounter with 3 curious Skuas, and dad helps Bo to dig a channel in the pebble beach.

Coming back to the ship we have a special lunch: a BBQ on the upper deck! With blankets across our legs and our anoraks on, we enjoy the outdoors while eating a scrumptious plate of freshly grilled food. It gets us ready for our afternoon landing in Whalers Bay, an old whaler station now left to decay on the shore of the bay. With fur seals lounging around and Skua chicks finding their way it is another great site to explore and imagine what life as a whaler must have been like. As a bonus, the volcanic activity can be experienced through a hole dug in the beach, with hot water pouring into it. No cold hands on this trip!

Today is the day we hit the mainland of Antarctica, and with that finally get the official tick in the box of continents; All 7 continents visited! To do so, the ship takes us to Portal Point, where we hop into the zodiacs again and get dropped off at a rocky landing site covered in snow and ice. This is the moment the boys (and especially Bo) have been waiting for: Snowball fights! The site has a good climb up the hill for a 360 view of the surroundings. It is where you truly appreciate the sheer size of the continent and the snow and ice covering it. The sun starts to peek through the clouds from a distance, which ups the mood even more. We spend a few hours taking pictures, checking out a weddel seal that is coming to say hello, and digging a snowman.

The afternoon holds another highlight: A zodiac cruise in beautiful Cierva Cove. The bay is filled with ice already, and the sun has officially come out, giving the late afternoon cruise a perfect low hanging light that brings out even more of the magic. We join Sanne in her boat, and follow the zodiac of Ab to find some wildlife and take pictures of the massive icebergs floating around. With several penguin colonies around, we are bombarded by penguin groups hopping through the water (both Gentoo and Chinstrap). Just a few minutes into the ride there is a leopard seal on a chunk of ice, lounging in the afternoon sun. Being one of the bigger types of seals and having quite a mean looking face, seeing one up close is very impressive.

Later on however the most impressive leopard seal sight happens right in front of us; a leopard seal hunting for a penguin! The penguin frantically hops through the water in front of the seal, but can not outrun it. The seal gets hold of it (in the meantime small terns gather to pick small pieces of penguin out of the water) and quite brutally swings it around, hitting it on the water and this way devouring it right in front of us – and in front of a penguin friend overlooking the whole thing from the iceberg above… Nature at its finest, and a very unique look into the Antarctic circle of life. If this disturbed anybody, the penguin show after it – penguins jumping into and out of the water onto the rocks – is good enough for a laugh and to shake off the bloody scene. All in all a fantastic zodiac experience, and as the sun sets, we go back to the ship, satisfied with yet another amazing day at the bottom of the world.

As we sail further to the next stop on our Antarctic itinerary, we have a bit more waves again and take in the views. Sometimes disturbed by the sound of a block of ice scratching the side of the ship, we make good progress and get to Brown Bluff, known for its … well brown bluff :-), and the penguin colony it houses, mostly Gentoos but also our first sighting of an Adelie! It is another landing with plenty of wildlife, massive chunks of ice on the beach and a beautiful setting to take it all in. We are starting to get used to this!

In the afternoon the plan is to land on Kinnes Cove, but the weather is too rough meaning the surf is to high to land zodiacs safely. So plan B comes to play and this is another zodiac cruise with a bumpy entry into the zodiac. Those with not so great balance are advised to stay on board, but of course we are the more excited about some more challenging zodiacing. We get on board with Sergey, and float around icebergs and the coastline, looking for what the area has to offer. We are not disappointed, as AGAIN we see a leopard seal on the hunt, and scoring a nice fresh piece of penguin meat right in front of us. The rest of the afternoon is filled with more penguins and seals, just the way we like a zodiac trip!

En route to South Georgia our last stop around Antarctica is Point Wilde at Elephant Island. Too rough to land, it is the place where explorer Ernest Shackleton had to leave his men behind more than 100 years ago and find help across the ocean in South Georgia. His ship, the Endurance, was lost as it got stuck in the ice before winter, but then could not be saved anymore as the ice crept in further. Incredible coincidence: Just days before our visit to this remote spot, adorned with a bust of the captain of the Yelcho that saved the crew in the end, his ship is found at the bottom of the ocean, more than 3000m deep! It is a monument and thus can not be touched or salvaged, but we see the crew responsible for the discovery and their ship later on in South Georgia, bringing the whole story even more to life than it already did.

Out over the Scotia Sea

Saying goodbye to the Antarctic is bittersweet as we know we have another stunning wildlife spot on the itinerary, but the most challenging bit is these sea crossings and the swell they can produce. While we keep hearing how great and calm the sea has been, it does not stop the sea sickness from creeping in (mom) while the boys are thoroughly enjoying their time out at sea. One moment all nausea is forgotten however as over the ship microphone a group of eating fin whales are spotted.

You know it is something special when the entire crew comes out (including the captain) and an hour of sailing time is used to float around this incredible sight. Everywhere around the ship these massive mammals come up and spray their typical spray while gorging on the krill that must be right beneath the surface. Not just whales, but large groups of penguins, seabirds such as the albatross and other big fish come out to the feast leaving us all awe struck by this fantastic display of nature. Not know for their group feeding, the sight of approximately 50 fin whales leaves the marine biologists on board mesmerized as well, giving us a true sense of how unique this experience is.

But on we go, as we have a long distance to cover towards our next stop. Taking over 2 days, we are not bored however, having several presentations given by the crew on history, geology and biology of the area we travel through. We enjoy some great movies about the wildlife we encounter and are spoiled by the chef that keeps on feeding us tremendous amounts of delicious food. Granted, the boys enjoy it more than mom, but that does not take away the excitement of our journey! Preparing us for South Georgia we see a video narrated by none other than Sir David Attenborough which truly gets our juices flowing… South Georgia here we come!!