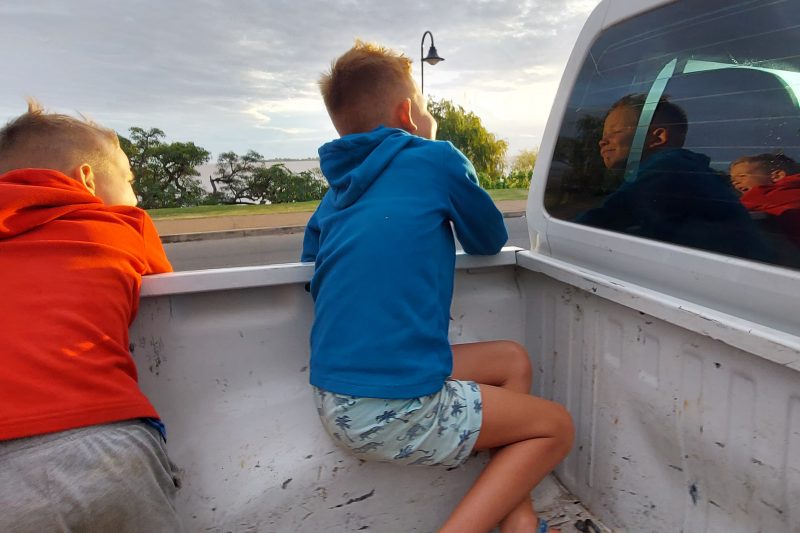 A new country, new (Covid) rules, new exchange rates and other cultural differences. Number one: Everything here is at least twice as expensive as Argentina, number two; we do not see anybody with mouthmasks. Seems like the country is relaxing its rules right on time and we get to enjoy a break from all of it, maybe forever? The plan is to cover the edge of the country from Salto all the way down along the river and then along the coast back up to Chuy where we will cross into Brazil. 1000km in total which we will cover in approximately 9-10 days, so an easy pace.

First stop is San Niconar, a beautiful campground in the thermas region with 2 beautiful pools that are heated by the thermal action in the region. This means that one pool is roughly 30 degrees and another 40, warming you through and through. Conclusion; the boys spend the entire day in the water, so much so that the skin is all wrinkled up at the end of the day. The campground is beautifully set up with grassy sites, a parilla (of course) and water / electrics. It is quite a step up from what we have seen in Argentina, but the price is at least 3x as high as well… We make a fire both nights and have our last marshmallows, the plan is to use as much of our stock as we can and then stock up again in Brazil where we hope prices are kinder again!

Maximizing our time in the pools, we drive off south at 11am and head out to Fray Bentos. The roads in Uruguay are very good, all require toll payments that are very annoying when you have not been able to get your hands on any Uruguayan pesos yet, but we make good progress along the way. Fray Bentos is a town that became world famous for its meat processing plant, which has now been turned into a museum. Of course after our share of asados we are well aware of the amount of meat available here, but we did not know that the process of creating canned staples such as corned beef was perfected and executed here and shipped across the globe for more than a century (OXO anyone?). And so we visit the museum that is hosted in the old factory buildings, and get a feel for the industry and the towns heart while walking through the well-preserved buildings.

Finding a place to sleep here proves to be somewhat more difficult, finding cash is an absolute nightmare. And of course the most affordable place wants to be paid in cash… Strangely Uruguay is ok with a large amount of US dollars floating around, so much so that ATMs give out pesos AND USD. Moreover, after trying 4 cards and 10 different ATMs, it turns out our international Mastercard will only be able to take out USD which you then have to exchange for pesos to get cash… sigh… Anyhow, we land in an old musty colonial building downtown for a night, and decide to do the proper South American thing and have a meal at a streetcart – Chivitos it is, the steak sandwich coveted by all and now also enjoyed buy us :-).

We travel further along the coast and land in the beautiful area of Colonia del Sacramento, a colonial town that still has some very pretty cobbled streets and atmosphere. From our Airbnb it is a good 5km walk along the coastline, so we enjoy the different barriers along the way and end up in the middle of town. Having zigzagged through the little streets, taking in galleries, shops and some leftovers of the old town. With streets being taken over by its trees it truly is worth a stop. Tired from the long walk we decide to find a lift back home, and we very quickly get picked up by a pickup truck who goes all the way in our direction, which is of course the highlight of the day for the boys.

The next morning before heading out we visit the Plaza de Toros, a bull fighting arena that has been partially restored in the last five years and now holds historical tours. It is a very interesting tour detailing the history of the town, which is Real de San Carlos right next to Colonia, and how this arena came to a very sudden end with bullfighting being banned only 2 years after its inauguration. Having been left to dilapidate for almost 100 years the question became tearing it down or restoring it, and thankfully the latter was decided. Now 40% is restored and used for cultural events like concerts, while the guided tours tell the story of the building and surrounding area.

We can of course not drive along the coast of Uruguay and not visit its capital Montevideo! With a short drive there we arrive in the afternoon and check out our Airbnb after parking the car in the street (and being reassured that it is safe there ;-)). The small apartment is a very quaint little place that immediately feels like home. The building is old and colonial and the elevator a piece of antique which thus makes it already a star attraction. We settle in, have dinner and enjoy the Wi-Fi with some watching of ‘Wie is de mol’ (we know, we are late and the season has finished but don’t tell us yet!).

The next day is full Montevideo exploration time; we walk 15km in total across the city visiting the long costanera, the harbour, the plaza de independencia including mausoleum, many parks with playgrounds, the fresh food market and to top it all off the panoramic viewpoint to suck it all in once more. With all that walking we more than deserved an ice cream, so we enjoyed that on the stoop of the municipal building. Montevideo is a very laidback city, very non-south american and shows how well organised this country is, so it was easy to navigate and walk around. But it also with that lacks a bit of heart… which is the general feeling we get from Uruguay; safe, organised, neat, pretty, green, and thus a little bit boring ;-).

From Montevideo we take 2 nights to drive towards the border of Brazil, popping in and out of the coast enjoying the coastal towns that dot this part of Uruguay. With one of the bigger being Punta del Este, we cruise the costanera and check out all the beautiful houses along the road. We of course can not miss out on ‘the hand’ for a quick cameo there, before landing in the tiny town of Balneario Buenos Aires for some good ol’ beach time. The water is a good temperature (for Dutch people obviously) and with rain in the forecast we take full advantage.

Next and last overnight stop in Uruguay is close to Cabo Polonia, in a beautiful old school building. Driving there we pop into la Paloma and Pedrera, two pretty beach towns which we can only imagine are sprawling in summer, but close to dead this time of year. Our overnight location is fantastic and we spend all afternoon relaxing, playing with the 1-month-old kittens and enjoying our leisure time here while planning the final 2 months of our South America leg. The boys finish two schoolbooks, so the luggage gets lighter from that end as well… good times!

Next week: Brazil here we come!