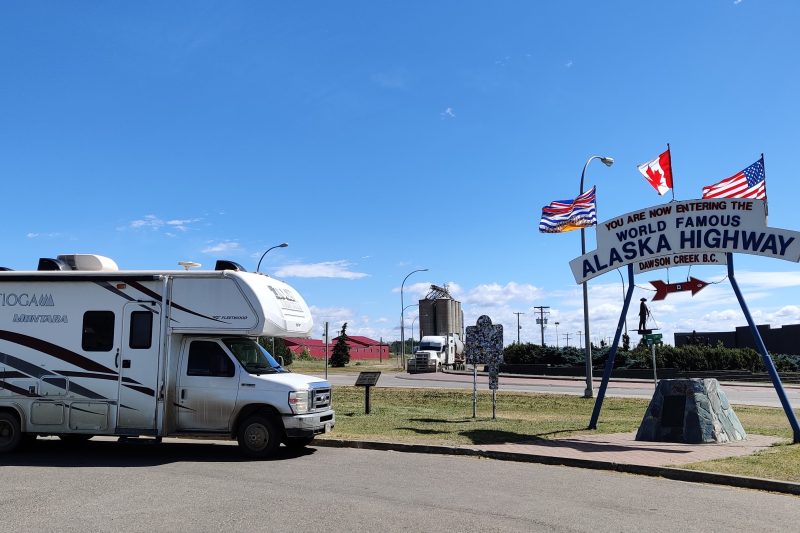 End of the Alaskan Highway

Driving down the Alaskan Highway to Hinton, Alberta

As we say goodbye to Dawson City, we are committing to a very long drive ahead to bridge the 2200 km getting down to the national parks area in the south of Canada. This means flying down the Alaskan Highway with just stops to get gas (ouch, every time is a 200+ dollar hit) or switch the drivers seat. The first leg is only a few hours down through Yukon to the Five Finger Rapids, where boats had challenges to navigate the Yukon river through them back in the day.

The next day we try to get 1000+ kms in, starting early (when everybody is still sleeping) and ending late, but as we go south and the end of the day nears, we realize that the never-ending daylight of the north are over! Around 10pm we have to call it quits, but especially in the last 400 km we have been really treated with a fine wildlife line-up: 9 black bears (including a mom with 3 cubs), 2 herds of bison blocking the road, elk, caribou, moose. Not a bad day in both kms driven and wildlife seen, so we are confident we can make the whole stretch in one more day. The last day we keep the same schedule, smile at the Alaska Highway 0 mile mark, and finish the day in a new province, Alberta, in the lovely town of Hinton.

Main reason to not make a dash for Jasper NP immediately is that Hinton has a bike park we want to check out. We get up early and have breakfast at the parking lot of the bike park as we prepare for a morning of fun on the trails. The bike park is fantastic, well maintained and marked, and between two parts of the trails there is a beautiful boardwalk over the marshes which is really fun to ride. We take the Happy Creek trail of 6km, and spend time in the bike park with the pump tracks and jumps before packing up the bikes to drive out to Jasper.

The drive to Jasper it becomes very clear why the ‘Rocky Mountains’ are called that, and the beautiful blue icy rivers and lakes are absolutely stunning, worthy of being protected through a National Park. We collect the necessary information at the visitor center and then head straight to the Wapiti campground to find a spot for 2 nights. The only thing available in the middle of summer high season is a parking lot spot with electricity. Not really the type of camping we have become accustomed to, but as Jasper NP and the connected Banff NP do not allow any boondocking, we will have to take it to be able to enjoy the national park from within. We enjoy the rest of the afternoon at the campsite, chilling, playing and doing the regular little maintenance things on the RV.

The next morning we pack our (water) bags for a day out on the bikes, riding the trails. We have a fantastic ride of 30+ kms where we take plenty of singletracks through forests, marshes and around a string of lakes and along the river. For lunch, we stop at Lake Edith, where we take a dive in the water, and the boys manage to borrow a sup from another lake goer and have some fun with that. Then we ride back to Jasper for a well-deserved ice cream to top off the day! The way back to the campground Sven takes a different trail… or so he thinks, but halfway through a big male elk clearly tells him to go back up the mountain the way he came :-p. We end up at the RV at the same time where we of course don’t believe his adventure without pictures, but we give him some slack.

This might seem a bit extreme, even for us, but the truth of the matter is that this area of Canada has connecting National Parks you drive through within short distances of each other. The main draw for today is the Icefields Parkway, the main road that connects Jasper and Banff and goes through 200+km of lakes, glaciers, forests and waterfalls. We start our day early to avoid filled up parking lots, and get our share of waterfalls in first with the Athabasca and Sunwapta falls. Saying hi to a lovely black bear along the way… and another mom and cub later on. Halfway on you get to a large visitor center right at the Athabasca Glacier, another staggering confrontation of how fast the glacier is receding. This is where the next tag is scored by the boys, their chain is starting to fill up nicely!

From there you basically roll into Banff National Park, where we took a cool short hike to another hidden waterfall, and as we drove on saw a grizzly besides the road. So did a lot of other people who happily got out of there cars to see better… incredible! We had some further stops at Bow Lake and Waterton Lakes, before we land at the end of the Icefields Parkway and to the town of Lake Louise. Here the touristiness of it all really hits you, with little place to park, shuttles to do ANYTHING and people and traffic everywhere. Guess we are not that used to crowds anymore, but it really made us fill up on gas (40cts/liter cheaper than British Columbia), get the Xplorer booklets for the area and dash out of there again.

20 minutes down the road there is Yoho National Park, a smaller park connected to Banff National Park, with a nice visitor center at its center. We explore the spiral tunnels created for the rail road where we say hi to another black bear again, and then end the day with a dip in the lake and another tag scored for the boys. We spend the night another half hour away at the edge of the Kicking Horse river, with another satisfying day under our belts!

We decided to make a out and back drive to enjoy 2 more national parks in the area; Glacier and Mount Revelstoke NP. Glacier NP is a park crossed by the trans-Canada highway, with several short hikes up the mountain and along the road and a stellar Discovery Center at its midway point; Rogers’s Pass. It has some great movies about bear awareness and the management of avalanches in winter along the pass, and of course the boys wrap up another Xplorer booklet here for a glacier blue tag.

Driving along the highway we stop at the rockgarden trail which is a fun scramble over boulders and rocks, the skunk cabbage boardwalk along wetlands, the bear creek trail to a thundering waterfall and then on to the town of Revelstoke. The town has two important mountains: Mount Revelstoke which holds the national park, and Mount MacKenzie which holds the ski/MTB resort. We first head out to the bottom of the former, as it has a kids bikepark at the bottom that the boys of course want to explore. In the meantime Sven heads out to the MTB resort for some serious downhilling.

After rolling over the jumps, seesaws and climbs of the kids park for a few hours we pack the bikes up at the back of the RV and drive the 24km road up the mountain to the top. The wildflower season is late this year which means the summit is covered in colors, and the fire lookout at the top is a great destination to have a short hike to. Driving down the mountain we have a final stop at the Nels Nelsen ski jump, a former ski jump where there is now a metal harness you can hang into to get a feel for what it must have been like to jump off this jump when Nels Nelsen set a world record here more than 100 years ago! Very nicely done, and really scary, so we brave it and move on again to the MTB resort where we find Sven again who had adventures of his own – especially on one of the world’s longest downhills he took after going up the ski lift for free :-p.

After a good night sleep at the ski resort parking lot we drive out back towards Banff. This time we take a right turn after Rogers pass to take the Kootenay-Columbia highway along the Columbia river to the picturesque town of Radium Hot Springs. The drive is through much more inhabited land with farming and small towns, as opposed to the wilderness we have driven through the past few days. In Radium Hot Springs we of course hit the visitor center for some Xplorer work and to find out about camping options for the night. As all the parks are connected and no boondocking is allowed, we need to figure out one night to ensure we make the most of the Kootenay/Banff area.

With a few options given by the visitor center we drive into Kootenay National Park, which is again a beautiful sight, especially as we roll over the pass into the valley. Along the way there is a nice stop where the concept of wildlife underpasses are explained which we explore shortly. Then on to the Marble Canyon campground in the park, where we luckily find a spot for the night. While we relax a bit, Sven tries to clean up the outside of the RV (we had somebody ask the other day if what we had on the RV was Alaskan mud 😊 err… yes sir!) helped by a little summer shower.

Once the weather clears we go on the short hike across the road into the very impressive Marble Canyon, which has several bridges over the canyon right up to the enormous waterfall at the end. Kim gets surprised by a ground squirrel in the public toilet – which the boys find hilarious of course –  and then it is time to go back to the RV for dinner, a game and bed time.

Next week: Back to the US – Montana time