How to: Make the most out of Olympic National Park in 5 days / 4 nights 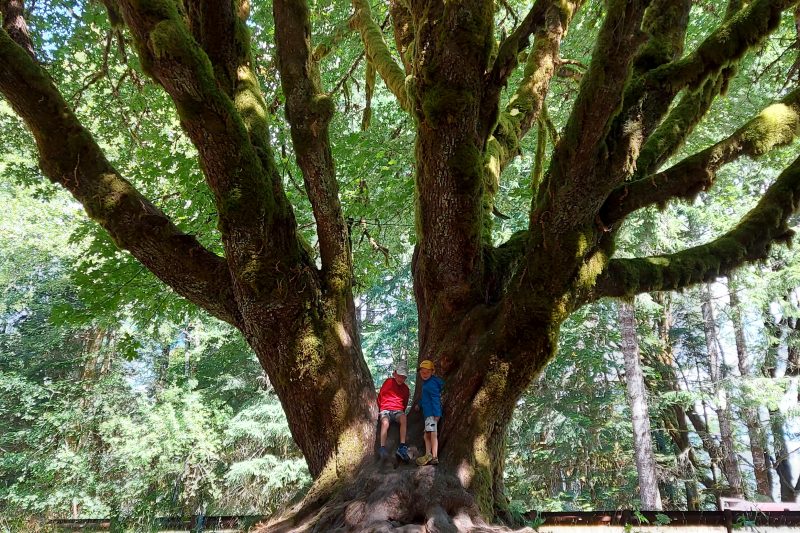 How to: Make the most out of Olympic National Park in 5 days / 4 nights

This is an itinerary you could take in the Olympic National Park in Washington. We did this as part of our Americas trip, which was in a 26ft RV, and with two small boys at 5 & 7 years old.

As a first move, coming up from Tacoma after a stay at Harvest Host ‘Reeds Sweet Wines’, we drove up on the east side of the NP and had a lunch break right before the floating bridge. There is a nice little park including playground at the water (Salsbury Point Park) right at the boatramp, which is perfect for a quick break. From there, it is a short drive up to Port Townsend, which boasts a vintage main street covered in antique stores and makes for a lovely stroll. The real relaxing end of town is Fort Worden State Park however, which has a proper park and beach with plenty of room to entertain yourself or relax.

We traveled on, upward into Olympic National Park, but before actually entering it, we stayed in the parking lot of a casino, the 7 Cedars, for free! They even had 8 spaces with electric and water hookup, but those were already taken, so we simply parked in the big parking lot. We had to sign up in the casino, won a beginners 5 dollars we lost again on the machines, and the boys were even allowed to have a quick tour through the casino to get a feel for the place. As a one-nighter it was absolutely perfect…. Did I mention it was free? 😊

In order to visit Olympic NP, you have to pay the access fee. Olympic is 30 dollars for 7 days, or you buy an annual pass for ALL National parks, at 80 dollars. This is of course a great deal for us as we plan to visit as many as we can, and it is valid for everybody in the RV (or up to 4 16+ adults)!

We decided to stay in an NP campground for the first night – Heart o’ the Hills – , and after claiming a spot (it is first come, first serve), we made our way up to the top of the Hurricane Ridge. It was a gorgeous day, so thankfully no hurricane in sight, but we can imagine how spooky it can be up there when the weather turns! Our RV was not allowed for the last 1,5 miles, so we decided to put our thumbs up and try to score a hitch to the start of the trail up the Hurricane Hill. Having two little kids helps, so we started the climb all fresh and ready to go. It is fully paved, and a steep ascend, but the rewards are quite awesome. There are still patches of snow in the middle of summer (one you can actually stand on is right behind the furthest panoramic sign at the top), deer and squirrels abound, and the views at the top are simply stunning.

When you drive out, don’t forget to get your cancellations at the Visitor Center, before making your way to the trailhead for the Marymere Falls. After a steady easy walk, there is a steep and narrow path up to the falls. The whole trip is only 1.8 miles return, count on 1,5 hours with small kids. If you feel like a plunge in the lake, don’t do it at the trail end, but make your way to the Bowen Meadow on the other side of the turnout. Swimming is allowed but only for the brave!

Lunch on the go, as we needed to catch low tide at 3rd beach. Tidal charts can be collected at the Visitor Center, and depending on the tide you may have to cut Marymere short. The drive from Marymere to the trailhead is 1 hour, and the walk to the beach another 40 minutes (with small kids), so count on 2 hrs before low tide if you want to make your way there on time from Marymere. The walk itself is really nice and foresty, with a steep decline at the end down to the sandy beach. The beaches of the coastline are known for their tidal pools, which show marine life you would normally not see at a regular beach such as anemones, starfish, urchins, etc. Unfortunately we caught the worst tide of the month, but were still very impressed with the things we saw. We can only imagine what it is like at a better tide… After some sanded play on the beach, we made our way back to the RV to drive out to the Hoh Rainforest road for a boondock night.

The next day, we wake up early and leave for the Hoh Rainforest Ranger station before having breakfast. The Visitor Center at Port Angeles had mentioned that the Hoh Rainforest parking lot gets crowded during the day, which means that people will only be let in when another vehicle comes out. To avoid this, we drove there before 9:00, and decided to have breakfast in the parking lot of the ranger station, before heading out on the trails. This was a good call, as 10 minutes after we arrived all RV spots were taken, and when we drove out a few hours later, there was an insane queue out by the NP gate to let people in.

We first visited the ranger station, which had a very good display on the rainforest and its inhabitants. Don’t make the mistake of not walking in because you already went to another station around the NP, they all have different exhibits and information. Especially the banana and liquorice snails peaked the interest of the boys, for which there was an extra cancellation in their book, so the hunt was on! We took both loop trails from the station, the Hall of Mosses (0,8 mile) and Spruce Tree (1,4 mile) which were easy hikes and very impressive. The first is a loop that shows all kinds of spooky mossed trees and explains about how fallen trees create rows of new trees on top of them, a colonnade. The second actually passes the river, where in our imagination of course we were waiting for a bear to appear across the river to scoop up a salmon! We didn’t see one, but there were warnings for elks and bears at the beginning of the trail.

After Hoh, and enjoying the traffic jam we passed, we made a long drive down to Quinault Lake. If you have time and it matches the tide, you can hit Ruby beach and/or beach 4 for some tidal pooling along the way. We had a nice picnic on the north shore of Quinault Lake before heading all the way south towards our last Harvest Host stop around the NP; The Azebrasis ranch. A lovely small ranch with a few horses and a green pasture you can park in. Charlie, the host, showed us around and helped us to some fresh produce from her vegetable garden, which was really tasty and educational… Who knew stevia is actually a plant, not just a brand??

Day 5: Head out back to Seattle or down to Long beach / Oregon

After the stay at Azebrasis Ranch, you can go either back towards Seattle (stay at the Reed’s Sweet Wine Harvest Host!) or move down along the coast towards Oregon. You take your pick and continue to travel!

Check out our other posts on our travels through the Americas and other destinations around the world!

Great pics. and description, I’m really enjoying this and look forward to the next adventure. After you’ve done so much work pimping up yourRV I’m dying to see the results. Why not show us a little video or pics. how it looks inside. Lots of love, mj

Thanks! Agreed, but we need to do some final touches to make the end result look great on the pics hahaha… so a little bit more patience!