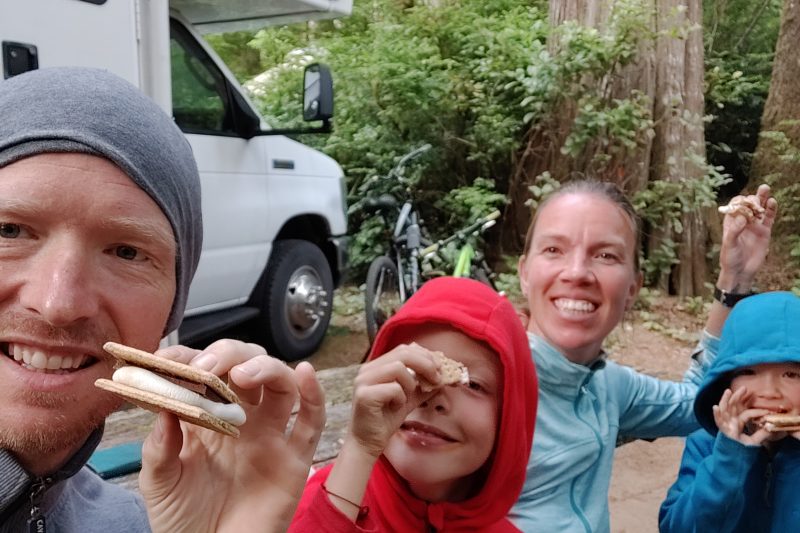 After our first week on the road we are starting to get the hang of things and push on in this amazing country we are exploring. We ended our Washington based adventures (for now) in Long Beach, after which we moved on into Oregon and followed the coast southwards.

Driving down to Long Beach was easy and quick, but finding a place for the night was somewhat more of a challenge. We decided to find a spot for 2 nights and a proper campsite to do some much needed laundry, but Long Beach is a popular place which means the rates are very high for a tiny cramped spot along the road… get further out and the price of a camping night is the same as getting a hotelroom! We scouted a few different places, all varying from 40-45 dollars, when we ended up at another Thousand Trails site. She had a site open for 2 nights and was OK to give us 50% of, which meant a 32 dollar rate, which we were happy to take of this camping that was out in the dunes and had all the facilities you would like, including a heated pool/hot tub! Our luck is truly turning…

As Long Beach lies directly at the end of the Columbia River, it is also the place where Lewis & Clark ended their expedition 200 years ago in crossing the United States from east to west, discovering uncharted territories and crossing the Rocky Mountains. The history is told in different places in the area, through beautiful visitor centers and activities. Of course our National Parks pass came in handy again, and we got to learn a lot about this impressive endeavor. To get there, we took the ‘Discovery Trail’, a smooth tarmac bike path created through the dunes (which reminded us very much of our own bike trails in the Netherlands) which was the perfect place to test the tandem we had bought for Bo. The idea is that he can ride his own bike while he can, but we can attach his bike to another bike when he gets tired or the roads are too rough/tricky. It took some getting used to, but the added benefit is that he can ride along, so he is like a little motor helping to get up the hill. The biggest benefit of course is that it widens the range of the bike rides we can take, so our first day of riding we covered 15 miles / 24 kilometers easily.

Biking makes hungry, so we made our way to Scoopers, a traditional ice parlor with 64 flavors of ice. The boys of course had eyes bigger than their stomachs, so we let them order a 2 flavor version, only to let them experience they can never finish… So that is off the list for the rest of our journey :-). A dip in the pool, and wrapping up laundry no 3 meant the end of the day, as we got ready to make our way down to the next state on the list: Oregon. As we went to bed, a big fog rolled in from behind the campsite, which looked very spooky but gave some nice cooling effect after a hot day.

Oregon coast – Where does that fog go!

So the fog was apparently a standard at this coast, coming and going when it pleases, and drastically lowering the temperature as we made our way down the coastline. Crossing the Columbia River we visited some more sites of the NHS explaining us about Lewis and Clark’s expedition, and the boys received their first NPS badge! We drove down to Cannon Beach for a picnic lunch and stroll along the beach, where it was really windy and cold, yet people still sat on the beach in bikinis as if it was beach weather… We ended the day in Tillamook, home to the Tillamook cheese factory, which has set up a museum around the factory which is both educational but certainly a lot of fun too! We decided to skip the icecream line here (the boys were still full of the other day) but bought a small cheese cutter and some cheese curd instead (ow and a tub of ice cream but to go). To redeem some of the cost of the campsite, we ended up at another Harvest Host – The Blue Heron – which was simply a field of grass besides their facilities and along the road. But it is free, and the added bonus is a petting zoo with massive pigs, and a lot of old vehicles on the ground to play on!

But before we explore more, another challenge to deal with: Our bike rack. The rack itself is perfect, works like a charm and easy to deal with… but our bumper seems to not be built to deal with the strain. So we need to figure out plan B… get the bumper reinforced to be able to handle the rack or get a rack that goes into the hitch iso the bumper. For now we put 2 bikes in the storage under our RV (yes we have the space for that, we could even put all bikes there!) to give the bumper a break while we contemplate our options. Biggest challenge is finding a solution and then shipping them SOMEWHERE we can actually pick it up… To be continued

In the meantime we go further south and pass Neskowin, a town where several years ago a storm wiped away a big piece of the beach, uncovering an ancient forest called the ‘ghost forest’. We were extremely lucky to hit the beach exactly at what turned out to be the lowest tide in a long time, so we got a great view at the logs and how they are now inhabited by sea life. As we make our way down we pass ‘Whale Cove’ and decide to pull into the parking spot to have a look at the view… and what do you know, down the cliff around the cove is a gray whale, spouting its hole and making rounds. With an official whale trip boat nearby, we are just having the show for free… love it, and another animal to tick off our ‘Animal Bingo’.

Further down the coast we got to Yaquina Head Natural Reserve, which turned out to be a National reserve which meant we could enter for free with our NPS pass!! It was VERY windy so we had lunch in the RV while it wobbled through the wind blowing against it, but as we made our way down to the little bay we were greeted by 2 seals enjoying the surf.

Finding a spot for the night was again a bit difficult, but we drove into the Jessie M Honeyman State Park and asked if there was a tent site available (all RV spots were fully booked). This is where the joy of our relatively small RV comes in – 26ft can squeeze into anything and thus put us at a 21 dollar a night spot! We stayed two nights, and spend the next day on the trails around the site, hiking, mountain biking and rolling down the massive Oregon Dunes that cover this part of the coastline. As there was no fireban here, we were allowed to make our first fire and with that do a proper American first: SMORES!! A combination of crackers, marshmallows and a Hershey bar… YUMMMM!

One more jut before heading inland, to warm up!!

Our final move south before moving land inward was towards the Agaro Cape. Driving there from Coos Bay, we hit a massive bank of fog which was not very welcoming, but decided to pull through and see if the cape was as bad. There is a great hike along the cape, through forests, a botanical garden, a beach and the rugged coast line before making it back to the RV. On the way we were in for a treat, as we ran into deer, a little rabbit in the botanical garden, saw more anemone at the beach, and while we walked the coastline saw a dozen seals and a large group of pelicans. Part of the walk was wet and muddy, so we had our lunch in the RV to warm up and get ready to move land inwards.

We planned another Harvest Host: Girardet Winery. As we drove up the road we were greeted by Kristie, and the inland heat! FINALLY some warmth to heat up our cores again and get into shorts and shirts… The winery is a small family-owned affair with several spots to camp and even a chalet you can book through Airbnb! Of course we were welcomed with a wine tasting as the boys tried their hand at a truly American version of K’nex and got to know the animals on the estate; Nova the dog and a dozen or so chickens.

While the wine was absolutely delicious (we are suckers for a good Chardonnay, but the reds are what really makes the Girardet winery stand out), it was the hospitality of Kristie and her daughter that made us feel really at home. On top of the hill behind the main building are even some hammocks to lounge in, and a field of blackberries for the taking, which we of course stocked up on. Feels like holiday again!

Check out our other posts on traveling the USA and our trip through the Americas so far. Next Week: Making our way into inland Oregon and back up north.

How to: Get your money’s worth from the America the Beautiful Annual Pass  Next Post :
Previous Post :   How to: Make the most out of Olympic National Park in 5 days / 4 nights